Gigi Sohn has loads of recommendations for the FCC commissioner position, but hasn’t come to a vote thanks to senators. Biden has renominated Gigi in 2023.

Big media and tech is behind this, so we need to pressure legislators for support and a vote.

END_OF_DOCUMENT_TOKEN_TO_BE_REPLACED

Massachusetts bill S.186 to investigate electromagnetic exposures from technology could be redesigned to promote transparency & better representation, as suggested below. If not amended, a whitewash is likely, while with amendments this is still possible but less so.

The following are 6 proposed S.186 amendments, for which feedback is welcome (esp. #V, VI). These could be submitted as one amendment with a complete text or in parts as presented below: END_OF_DOCUMENT_TOKEN_TO_BE_REPLACED 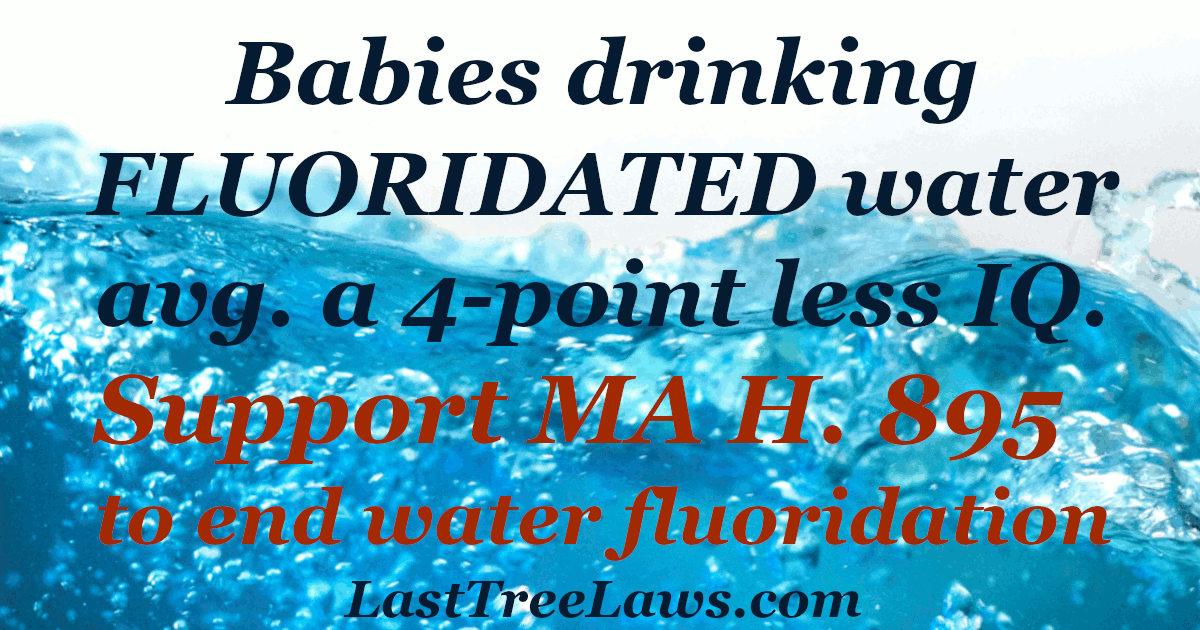 The following letter was testimony for a 2021-22 bill that was killed.

Many residents have sought to remove fluoride from municipal water supplies after examining the research.

In Wilmington, the Director of Public Health in 2000 recommended ending fluoridation after researching the subject. In Natick, a study committee of individuals defined as “qualified” “unbiased” and “scientifically trained” recommended the same. Cities and towns such as Topsfield, Gloucester, Rockport, Newburyport, Cambridge, Concord, Amesbury, Methuen, Worcester, Greenfield and others have also attempted to end water fluoridation. END_OF_DOCUMENT_TOKEN_TO_BE_REPLACED

I was curious what is with Agenda 21, tossed about as an evil by some, and examined complaints to find some good and bad.

First of all Agenda 21, now Agenda 30, is not mandatory or enforceable. Agenda 30 includes many laudable goals, such as recommendations to protect the rights of women and support environmental health for all.

Continuing with the positive, Agenda 30 seems to make some attempt to prevent big business from winning all contracts and owning everyone and everything. Small farmers, which have been decimated by the false promise of a green revolution and industrial agriculture, are to be protected from big business. Of course, protection may not exist in practice.

Secondly, the United Nations is an organization intended to share the thoughts of nations, or governments, rather than businesses. A one nation, one vote policy was intended to give even small, poor countries a say.

Isn’t discussion among nations helpful to preventing war? So, check, another positive.

Yet, in 2019, the United Nations made an accord with the World Economic Forum (WEF) to circumvent votes from each nation in favor of including business stakeholders in formulating decisions, as discussed in an article by Harris Gleckman on OpenDemocracy.net.

Ivan Wecke, in a recent article also posted at OpenDemocracy.net, discusses how the WEF chairman Klaus Schwab has promoted ‘stakeholder’ capitalism, intended to give corporations more power by setting aside democratic precepts of government so that corporations make decisions.

As with treaties and trade agreements, transnational corporations were welcomed to help craft the Agenda 30 vision, and Agenda 30 states that nations and ‘stakeholders’ (i.e. businesses) are to take apart in achieving the goals.

In other words, transnational businesses will have access to the U.N. plans most lack, and the time and wealth to ‘fix’ decisions with details against cheap solutions in favor of saleable investments. While U.N. plans are unenforceable, the plans are meant to guide countries and are influential.

To welcome transnational corporations into these discussions undermines the one nation vote policy and is a fundamental problem existing not only within the United Nations, but within U.S. local, state, and federal representative government, where businesses are often invited as ‘stakeholders’ into crafting laws and policies.

With illusions created by wealth, transnational companies can sidestep real solutions and cause indirect harm, such was seen in the opioid crisis.

I haven’t read the entire document, but Agenda 30 emphasizes innovation, such as modern energy investments. Yet better, cheaper options may exist with older technology or with none at all. Yet, businesses are likely to argue otherwise due to conflicts of interest.

I’ve criticized the smart grid as costly and harmful for several years, but my criticisms have fallen on deaf ears in both business and government.

There is a positive statement advancing the concept of medicine for all, or of affordable medicine, which remains a dream in many countries, but nowhere does Agenda 30 address accountability for pharmaceutical companies regarding honest marketing and safer pharmaceuticals.

Covid-19 is a perfect example of how admirable goals can be circumvented. Vitamin C, D, antivirals, and any cheap treatment are not part of the conventional standard of care or of much consideration. Vaccines for all are being offered only at hefty prices and, with emergency authorization liability protections for indemnification through the U.S. PREP Act. Abroad, companies have refused to provide vaccines unless profits and indemnity are assured. In the USA, no payouts for any related adverse reactions have been made at all, despite 1,693 claims as of 2 August 2021. Any risk taken is a risk borne, apparently, only by the private consumer.

However, I can’t blame the United Nations alone, or transnational companies, for failing to consider pharmaceutical accountability. The United States has done little to halt conflicts of interests of government officers or to insure pharmaceutical accountability. The answer is to first set up laws in our own country to at least prevent conflicts of interests, such as the ballot measure proposed at Last Tree Laws.

As far as private property dispersal there is a vague statement that all should have equal access to ownership of property. Agenda 30 uses the words “access” to ownership, which suggests that the meaning is about preventing discrimination in ownership, such as the historic denial of home ownership to African Americans or in some countries to women and ethnic minorities.

Equal rights to economic resources is also discussed, which may involve rights to water as countries struggle over drought or rights to agricultural land for farmers. While a nice idea, this goal is likely to go ignored, especially since the United Nations cannot enforce any of  its recommendations. Israel and Palestine battle over land in a way that shows just how useful recommendations for sharing are heard.

The arguments against Agenda 30 based on giving away private property are specious.  If ‘property’ is ever shared freely by the wealthy, then it will be a cover for transferring liability or creating ‘sharecroppers’ of some kind.

As far as sharing wealth otherwise, Agenda 30 advocates for social protection measures and these, if business interests reign, may not necessarily equal high quality work, education, or housing. The idea is noble, but is for ‘coverage’ which, like insurance coverage, may come with conditions.

Presently, businesses are mandating medical treatment for Covid-19 — this sets a precedent to allow businesses to mandate any medical care for ‘societal good’ even if the concept of societal good can be manipulated and abused. At one time women were thrust tossed into mental hospitals on questionable psychological assessments, in order to limit their opinions or to acquire their property.

I also see a statement that private property cannot be an excuse to harm others through environmental devastation, with which I’m sure we can all agree. Do you want your neighbor or any business to be excused on the basis of personal property to place, on their property, a hazardous chemical dump next to your home?

In sum, the criticism of Agenda 30 across social media is largely about redistribution of private property, which is off base.

Is the criticism that Agenda 30 will mean loss of private property fabricated by corporate interests to divert attention from the positive goals of Agenda 30, including limits on corporate power, or to divert attention from the detrimental influence of business interests? The American Policy Center, at the forefront of Agenda 21 and UN criticism, has long campaigned against corporate regulation, including pharmaceuticals, and environmentalism under the guise of private property rights.

Socialism has been successful in cooperatively-owned businesses. In socialism, the means of producing or distributing goods is owned collectively, such as work cooperatives like Real Pickles. Socialism can also mean when the government owns the means of producing and distributing goods as exemplified in part by Medicare and Social Security. The U.S. military has been held up as a partly socialist system.

Socialism does not appear to be discussed in Agenda 30, and cooperatives are mentioned only as a business entity like any other — not with any preference.

There is not mention in Agenda 30 of providing universal health care, although universal coverage appears mentioned as part of ‘social protection’ — coverage comes with many more conditions than anything universally applied. Restructuring taxation is not mentioned either, except to restructure energy subsidies away from fossil fuels.

In contrast to socialism, communism has failed in many countries. Communism occurs when the community provides funds to the government for equal redistribution, but in practice governments have pocketed the money. Some have observed that communism could work on a small scale, such as within a tribal community.

The ideal of communism is nice, and deserves less hate.

Communism is often used as an insult because of its association with authoritarian governments but also, probably, since communism frightens the wealthy. At one time just being accused of being a communist destroyed careers of people who were not even communist as part of the ‘Red Scare’ propaganda. To weaponize the word communist or any other academic idea is dangerous as it supports aggression, censorship and undermines free discussion.

Associating Agenda 21 or 30 with communism is pushing it. The United Nations, full of capitalistic and some wealthy nations, is not going to become communist or, if so, not easily.

The use of communism and socialism as marketing campaign insult to Agenda 30 may be a marketing trick to create division and shut down discourse. Agenda 30 doesn’t, so far as I can see, have anything at all to do with socialism or communism. The criticism, if it is even a criticism, is way off base. I would say that is a marketing trick. If only criticisms exist of Agenda 30 as communism or socialism, which does not exist in the proposal so far as I can see, then critics must be dismissed and Agenda 30 must be a good thing. I would say the public is being misused to attack Agenda 30 on the wrong and imaginary basis, rather than on any real basis, and I wonder if leading critics are paid for by some party intent on sowing division and prejudices in the United States.

Or, I wonder if the criticism is simply to divert attention from more important avenues for change.

On every issue, there are powerful forces united against change. The liability or potential financial collapse of  any business sector means that there are both personal (investments, job) and corporate interests in continuing the status quo, and so both individuals and corporations have an interest in undermining regulations and legal action, and in promoting half-baked solutions.

I believe it is worthwhile to examine strategies to divide and rule, which may include: END_OF_DOCUMENT_TOKEN_TO_BE_REPLACED

Outcomes of past wireless health risk investigations have varied by state as follows:

END_OF_DOCUMENT_TOKEN_TO_BE_REPLACED

Please note, initially there was one early mistake in examining one scorecard from NFIB, by confusing Rep. Joe Kennedy with Sen. John Kennedy, the latter being a Louisiana Republican and who has quite different stances than Rep. Joe Kennedy, a Massachusetts Democrat.

If citing research and opinions below, please credit the author or Last Tree Laws.

Question: Which legislator might best protect consumers from electromagnetic exposures from either utilities or telecommunications infrastructure?

Finding: Kennedy is the clear winner, and Markey continues to neglect a promise to attend to safe technology. END_OF_DOCUMENT_TOKEN_TO_BE_REPLACED