We prepare & support our own state ballot questions and legislation, supporting other’s work when time, to place people and the environment before profits.

JOIN BALLOT WORK here! (NOTE: SITE is BEING UPDATED – check back at the end of june/early july!)

We provide research and materials to lobby locally, campaign, educate for good laws, and to halt or fix the bad.

Learn more about us!

Check back to see as the site continues to be updated in JULY.

Because we work on limited time and money, please pardon us all generally for failure to fix and do everything perfectly or possible, PLUS join, volunteer, & donate!

Fall 2022 we will launch a signature drive to support a Massachusetts constitutional amendment, or 2023 if necessary.  This requires a great deal of planning and support, so please sign up for news and how to help HERE.

In sum, this proposed constitutional amendment requires real conflicts of interest reporting of designated state officers that is public, useful, and randomly audited.

This would also apply to candidates for the Massachusetts delegation to U.S. Congress, President and Vice-President.

The proposal is still in draft and so content may be changed.

A more comprehensive discussion can be found here.

A version of this ballot measure was submitted in 2021 to the Massachusetts Attorney General and was found to have one error, illegal inclusion of judges. This error has been fixed. The extra time resulting is being used to rewrite and strengthen the proposal.

Volunteers are needed to help by sharing on social media, writing letters to the editor, and get out the message. Guest speakers and article writers are also needed. Please take your own initiative, or check back for more information on how to help -- you can also join the email listserve here! 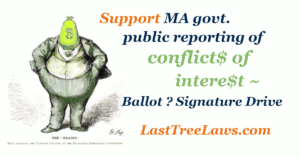 Volunteer help is always needed for success, but also volunteers are sought to help work one-on-one with this campaign.

If you have organizing, technological, publicity, writing, speaking, education, or other valuable skills which you would like to share, please send an introductory email that is text-only (no attachments or images please) describing how you can help, your background, why you are interested, and contact information.

If you would like to meet in person, there isn't an office, so it requires some organizing. Please email.

Also, Kirstin would like to apologize for being late and missing someone at the Easthampton Library on Saturday, 23 April, walking right by each other on the stairs.

Lobby for Massachusetts - URGENT! Updated 21 May

Please find the new lobbying calendar in the side bar of any post.

I know you care if reading this, so please help!

If you feel that the smart grid or wifi is a civil rights issue, then file a civil rights complaint with the attorney general's office. Please send a copy to us as well.

Our activity on social media may increase in 2022, however ironic - please like or follow if on these platforms.

Support Gigi Sohn for FCC Commissioner! We have heard from someone who knows her that Gigi Sohn is reasonable, such that even if she does not know, she listens and is fair. Right now, our FCC Commissioners are in the pocket of industry, so we need someone different. She is being attacked and supported by people on the left, but it is hard to verify from talking heads. One criticism is she is going to censor the Net, but if you check where she worked, Public Knowledge, a proposal on the subject says not to censor conduct, not content, and seeks to protect Section 230, which many have sought to undermine despite being a key to protections.  Senators in these states need to hear from constituents: Alaska, Arizona, Nevada, Montana, Colorado, Maine and West Virginia, especially:
1) Schumer - NY- Senate majority leader who needs to bring her nomination to vote (Note technology conflicts of interest)
2) Cortez - Matso - Nevada
3) Kelly - Arizona
4) Kamala Harris
5) McCrowski - Alaska
6) Collins - Maine

FDA Legal Petition - File a comment with the FDA to describe specific harm to you and others, including financial loss and physical harm, from wireless exposures or RFR, since more comments and specifics can strengthen the case legally. Here are brief sample comments.

Canary in a Gold Mine - Local MA theatre company is streaming a show on electromagnetic exposures with KO festival - or see PTCO.org.

Following are signature or action requests from different organizations.

Urge FAA and SpaceX to conduct a full environmental analysis of SpaceX - Michael J. Parr, American Bird Conservancy: "The Federal Aviation Administration (FAA) has pushed back the final review of SpaceX’s Starship rocket project in Boca Chica, Texas, due to a deluge of comments from activists like you." [They send a lot of mail afterwards, but nearly all for birds].

Wired Only Letter! This letter was prepared by CHD, which was part of a winning lawsuit against FCC for arbitrary guidelines. Share the news with this automated letter - click here.

If you are looking for research or information on any of the issues, please see the Resources page, which also has information on how to reduce exposures to wireless if that is of interest.